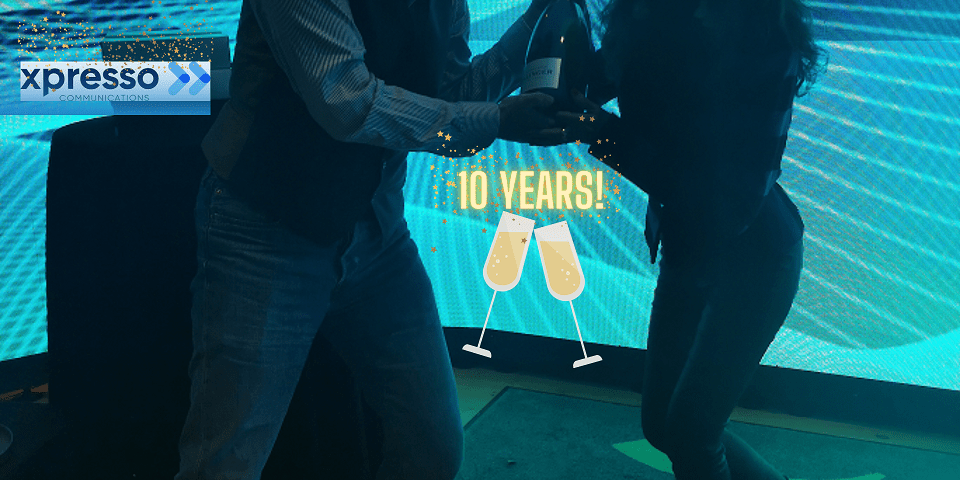 Celebrating our Tenth Birthday in Marketing Communications for Innovators

We look back at what’s changed within the broadcast industry. And what hasn’t changed about the way Xpresso does business.

When mindsets evolve, so does technology

That technology in the broadcast industry has evolved over the last decade is readily apparent. What’s sometimes less apparent is just how much attitudes and mindsets have changed though. Once upon a time, the prevailing industry attitude seemed to be that competition meant developing a standard or approach that was by some objective measure ‘the best’, and then forcing the hand of others (be that customers or non-competitor complimentary manufacturers) to fall in line. It was a zero-sum game and survival of the fittest.

In many ways it didn’t matter too much; analogue technologies only had a limited range of directions that they could really evolve in – interoperability was all but a de facto position in most realms anyway. And in the small amount of situations where competing standards or technologies resulted in attempts to ‘push everyone out’ and thus close off a few avenues of development, nobody seemed to mind too much.

But then digital hit – and suddenly the world was everybody’s oyster. Broadcaster engineers were bombarded with 70 different ways to do something, none of which would work with one another. There was a terror in getting locked into a vendor’s proprietary approach knowing that they might not evolve their technologies in line with the market, or might even fail to go the distance. No broadcaster wants to lock themselves into millions of dollars of equipment which in three years is going to be counted as ‘legacy’, has no ongoing support, and won’t talk to anybody else’s shiny black boxes.

Fortunately, vendor mentalities started to shift. There was a realization that in zero sum games, too many people were being left with exactly that: zero. Slowly, slowly, interoperability moved from being the antithesis of competitive business practice, to a buzz word at the core of every marketing strategy. Vendors clambered over themselves to reassure customers that the headache of getting disparate equipment to talk to each other was a thing of the past.

And this didn’t just come in the form of APIs. Vendors were actually starting to talk to each other. Things moved from a state of not just interoperability, but collaboration. The sharing of best practices, knowledge and ideas, the formation of alliances and groups – in essence, coordination of resources to achieve three central goals; progress in the industry on a technological level, ease and straightforwardness for customers, and – most significantly – mutual profit for all the vendors involved. Far from a zero-sum game, there was a recognition that when the broadcast industry works well (and together) it produces gains that are more than the sum of its parts.

NAB as a reminder for what matters

Nowhere has this been more apparent than NAB this year. The spirit of collaboration and community on display there has never been greater – and we imagine that Lockdown had a lot to do with that. And for us at Xpresso, it was hardly a surprise. The industry has been moving towards a collaborative model because it makes strategic sense for some time. But we’d argue there’s a deeper motivation behind it too: human instinct; a desire to interact, share ideas and innovate together. We just needed a collective reason to really recognize it. Lockdown finally gave us that.

Certainly, competitive forces may have subdued that instinct for a few decades (let’s face it, the 80s may have given us some great things – as Kate Bush’s resurgence is testament to, but we could perhaps have done without the Gordon Gecko ‘Greed is Good’ mantra). But when lockdown truly denied us of our instincts to interact, it gave us all a chance to reassess the paradigms that sit at the heart of our personal and professional practices, and the collective industry had an opportunity to fully embrace a concept of ‘winning together’.

And the best thing is that rather than leaving each competitor – and the industry as a whole – feeling like it is constantly precarious; balanced on a knife edge – instead, it feels like we’re setting the basis for something sustainable, something meaningful and capable of continued growth.

Nothing new for us, after ten years in the game

We’d hate to blow our own trumpet, but for us at Xpresso, we didn’t really need to reevaluate our approach. This month we’ll be ten years old, but right from day one we were driven by the centrality of human psychology – a force that we believe will always end up trumping cutthroat capitalism.  We adopt a mentality driven by openness; to collaboration, opportunity and connection. And we’ve encouraged our clients to do the same – which we hope has helped in some small way to three of them being awarded industry awards for innovation this year. We too were recognised for our still somewhat unique mentality with our very first Global Content Creation Agency of the Year award (2021-2022), granted in recognition of our progressive and strategic approach to content creation – particularly in relation to our development of blog content; something almost unheard of in tech-industries just ten years ago. These days, companies are now understanding our vision – communicating in a way that straddles the professional and the personal, the technological and the strategic, the comedic and the corporate.

It’s funny to think that ten years have passed – and that a great many of our clients have remained with us for that entire duration. In that time we’ve also expanded outside of the broadcast world, developing relationships with clients across Pro-AV and even further afield. The one thing that unites all of our community of clients is their commitment to creativity and innovation.

Sometimes it feels like the blink of an eye. But time flies when you’re having fun.