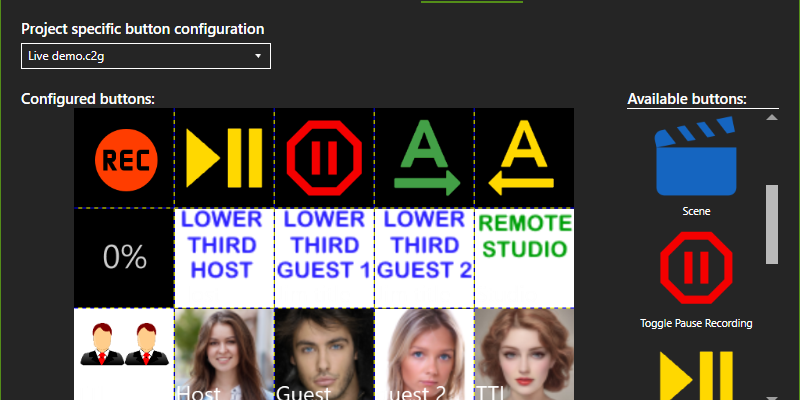 System can be used to create live panel shows, interviews and webinars

WebClip2Go today announces the addition of a Live Switching capability to its innovative video production system, thus increasing the range of applications that the system can be used for. The new expansion focuses particularly on delivering ‘talk show’, live streaming and interview-style productions, whilst still maintaining the core raison d’être of the system; the production of professional quality video without the need for a crew, expensive equipment or a complex post-editing process.

The Live Switching addition facilitates webinar and interview-based video production in real-time, but without the need for an on-the-ball, expert crew working behind the scenes.

Whilst the standard WebClip2Go system sees the video presenter pre-create a script and schedule of templates, and thus deliver their video in a pre-set structure, the new Live Switching option is ideal for filming scenarios which are not scripted and which benefit from more spontaneity and the ability to adapt to the action (for instance, talk or panel shows). The Live Switching unit allows for pre-configured templates and video elements to be triggered at the push of a button, creating a dynamic, multi-layered production in real time. The discrete Elgato Stream Deck controller – available with 6, 15 or 32 buttons – can be adaptably configured with a wide array of video components, and then used by the presenter or compere as they interact with guests or deliver their content.

This means that a full, multi-camera chat show can be created and managed by just one person, as they act and perform within the video themselves, with the unit used to automatically slot in appropriate camera switching, titles, videos, music segments, transitions and other professional-grade video elements.

This addition makes WebClip2Go’s approach to Live-Switching something of a unique proposition in the market – taking a widely available but incredibly complex broadcast technique and simplifying it to the point that it can be used by anybody with only fifteen minutes of training; something proven by the fact that potential customers are able to master the tool within the space of their first demo. By integrating the Elgato Stream Deck, WebClip2Go takes all of the capabilities of larger, more expensive switcher panels and offers them at an accessible price point – thus allowing any user the ability to create broadcast quality talk shows on their own using the moderator and prompter functionality, or with a single director or production assistant if desired. Either way, it grants the ability to create the highest level of live productions with a fraction of the resources usually needed.

Whilst the output is generated in real-time (ideal for live streaming), the system also creates a recording of live production and  all of the video and component streams – separate of their embedded components – so that post-air revisions can be made as desired.

WebClip2Go – with its three iterations: standard, PowerPoint-driven and now, Live Switching – represents a revolutionary approach to video production, significantly reducing the costs, space and knowledge requirements traditionally associated with filming and editing. Where these three elements would normally represent a barrier that prohibits many organisations from successfully leveraging the benefits of video fully, WebClip2Go eliminates these and therefore democratizes video production, making professional level video accessible to a wide range of organisations, from corporate to education to retail.

It achieves this by ‘frontloading’ the editing process – creating professional-level templates that users can then slot their content directly into, just by delivering straight to camera. This means that rather than spending hours with a full crew filming and then editing the footage in post, a single user is able to assemble, deliver to camera and then have the output rendered immediately in real-time. The video production process is reduced to a matter of just 15 minutes, and can be achieved by one person working on their own.

Speaking of the expansion, CEO of WebClip2Go Gerrit Bulten, said: “When we first developed the basic WebClip2Go system, we knew we’d come up with something that had almost endless potential. Our standard format brought the potential for so many different markets to integrate ‘presenter- delivering-to-camera’ style video into their businesses in an easy and affordable way. Our Live Switching addition now expands the types of video they can create without increasing the need for equipment, time or expense. We’re allowing entities from incredibly diverse markets access to the equivalent of broadcast-level qualities, formats and styles, but without the normal barriers to entry.”

The Xpresso Guide to the 2021 IBC Show
November 18, 2021
Recent Posts
Subscribe to Blog via Email
Go to Top