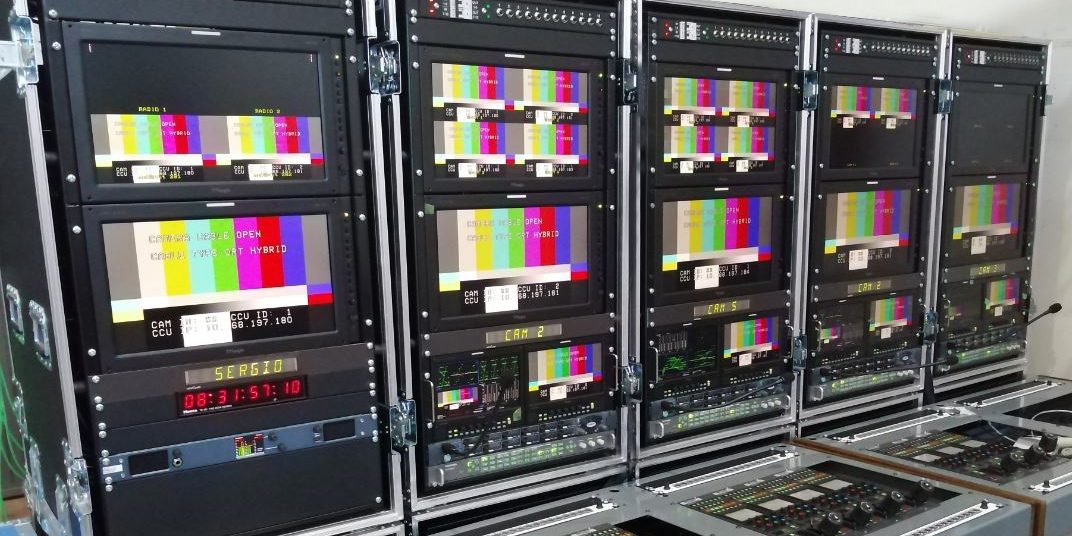 As the national public broadcasting company for Italy, RAI operates as one of Italy’s largest broadcasters, with productions that are distributed internationally. Video Progetti have an already established working relationship with RAI, having provided a range of turnkey implementations for them previously – including a range of Ka-Sat SNGs in 2017 and the infrastructure for many production and post-production systems.

RAI’s initial need was for an HD/SDR and UHD/HDR capable production infrastructure that could be setup quickly and easily in a range of locations and broadcast situations, facilitating outside production in contexts where even an OB van would prove to be logistically challenging. This unit will be the first RAI production system able to produce primary live events using either an HD/SDR or UHD/HDR setup, at just the press of a button.

As a result of this need for flexible functionality, the Regia Mobile 4 system developed by Video Progetti, makes use of a number of Grass Valley systems, including the Grass Valley Kahuna video mixer (9600 4/ME 4 DVE Channel HD 110 x 48, 4K UHD up to 26×12). This is then supported by a Grass Valley Kula, which operates as both DSK and backup system to manage full disaster recovery, including a backup Vega router from Grass Valley. The Grass Valley Densité is controlled through the cutting-edge broadcast control system “Human Interface” that allows for the automatic switching of emergency devices, whilst Telestream Tektronix monitoring solutions have been integrated to check the quality of the transmitted signal and balance, and to allow for full redundancy of the SPG master clock generator.

Grass Valley products have additionally been used for editing functionally with the Edius Pro 9 editing software, combined with the STRATUS MAM system and drawing from a K2 Media Server.

Meanwhile, audio is managed using the high-performance Calrec audio mixer with a high level of redundancy, combined with Genelec loudspeakers, whilst a Clear-Com intercom system is connected with a MADI to the main audio switcher. A combination of TVLogic and Samsung monitors have been integrated into the overall mobile production unit.

Together, this combination of top-level broadcast equipment provides not only the flexibility needed for RAI to broadcast in either HD or UHD with HDR enhancement, but – first and foremost – is mounted within rugged flight cases allowing it to be quickly and easily set-up in remote and difficult to access locations.

The central challenge for Video Progetti was not necessarily the selection of appropriate equipment to meet the technical needs of RAI (though this was carefully considered), but the selection and installation of equipment that could achieve these goals on such a small scale – allowing for all wiring and connections to be maintained within the confines of a flight case.

As an example, the Grass Valley Sirius router used within the system itself alone required the wiring of 576 cables, totaling a length of over 1.5km. A group of ten installation professionals from Video Progetti were allocated to work on the physical and technical installation of the flight case system, whilst a wider team worked on the initial identification of RAI’s needs and the design of an appropriate systems architecture.

“We enjoy working on projects for RAI” said Carlo Struzzi, owner and CEO of Video Progetti. “As one of Italy’s largest broadcasters, their infrastructure demands are often complex and challenging, and we relish the opportunity to rise and meet the task at hand. We pride ourselves on our ability to truly listen to the needs of the client and understand their business case, rather than simply pushing a generic technological solution. In this case, the need for HD/SDR and UHD/HDR flexibility combined with the need for the system to be entirely portable within a flight case was the central challenge, and we are extremely happy with the solution we developed.”

Further information on Video Progetti and its projects is available at  www.videoprogetti.it

Video Progetti is a leading Italian broadcast distributor and system integrator, representing the industry’s highest profile brands and with numerous blue chip clients. The company has a 20+ year track record in addressing complex challenges and delivering solutions that are innovative, flexible and cost-effective. Video Progetti’s expertise encompasses all areas of broadcast – from the creation of new infrastructures through the development of SNG systems to the delivery of OB vans and playout centres.

RAI – Radiotelevisione italiana is the national public broadcasting company of Italy, owned by the Ministry of Economy and Finance. RAI is one of the biggest television broadcasters in Italy and operates many terrestrial and subscription television channels and radio stations.RAI broadcasts are also received in neighbouring countries, including Albania, Bosnia, Croatia, Malta, Monaco, Montenegro, San Marino, Slovenia, Vatican City, Switzerland, and Tunisia, and elsewhere on pay television. Half of the RAI’s revenues come from broadcast receiving licence fees, the rest from the sale of advertising time. In 1950, the RAI became one of the 23 founding broadcasting organizations of the European Broadcasting Union.