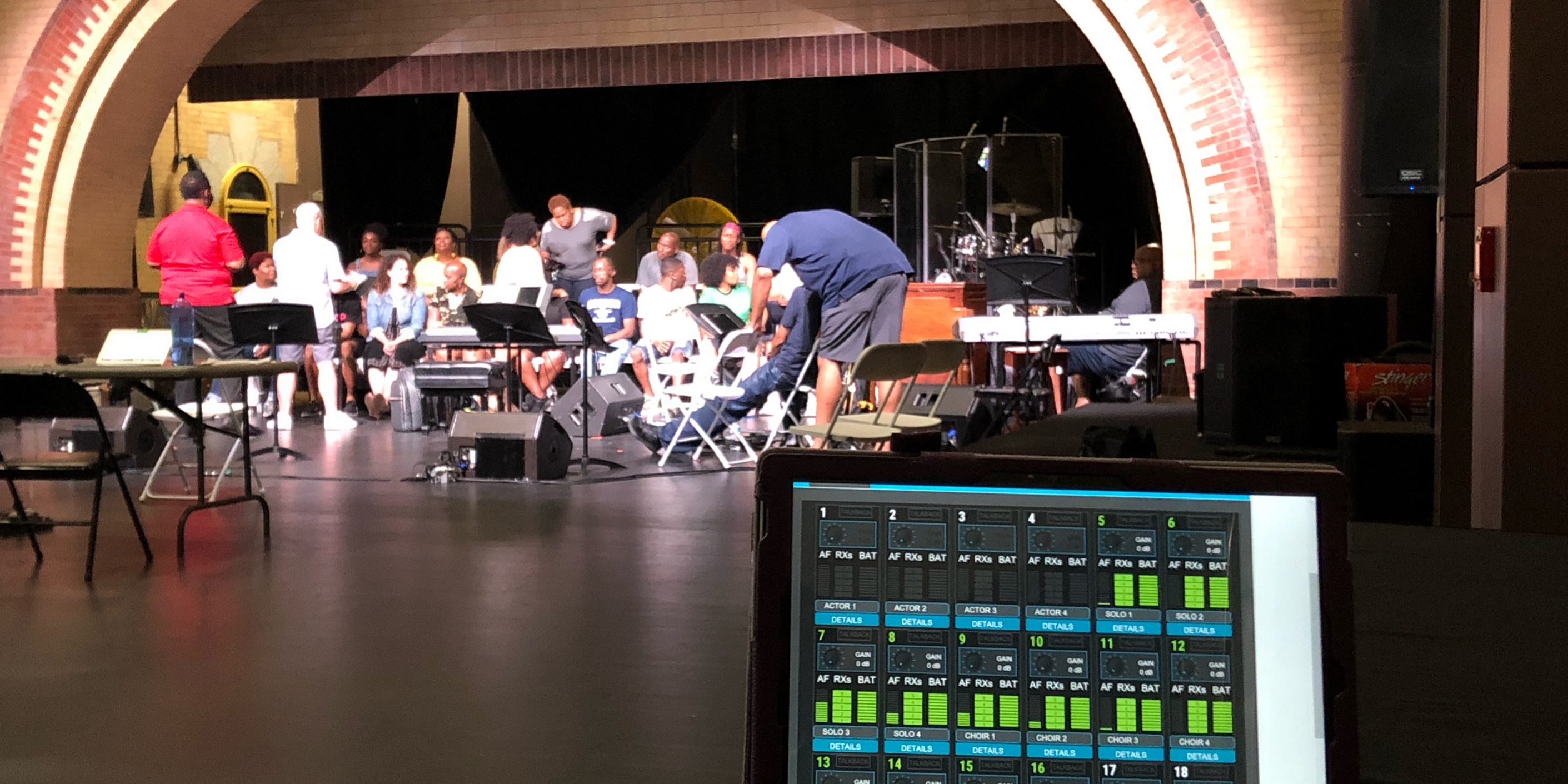 The art of making sound disappear

A night at the theatre has always been an experience full of importance and grandeur. Be it La Scala in Milan, a Broadway show or the Sydney Opera House, these bold, imposing venues, the elegance of evening gowns and dinner jackets, the sparkle of the chandeliers – they all set the stage for a night of enchantment and emotion.

It’s funny though that many of the associations we make with the opera and theatre are visual in nature, when of course the experience is one that relies a huge amount on the evocative strength of the voices and music together. We tend to focus on the visually obvious traits: ‘Can I see,’ ‘Is my seat comfortable,’ ‘Is the set aesthetically pleasing,’… We don’t usually consciously focus on the sound quality unless there is something overtly jarring which disturbs us. Sound is such a subtle part of an overall experience that when done at its best, it goes almost unnoticed. It disappears and instead becomes an emotional subtitle.

The last time I had the pleasure of visiting the opera (a mix of both work and pleasure…) I took the opportunity to ponder the intricacies of the sound quality of various performance spaces, and how we manage them. Hundreds of years ago, compositions were created with the type of performance venue in mind. Gregorian chant was composed specifically for medieval cathedrals where the reverberation could extend over a length of time. Indeed, concert organist E. Power Briggs identifies that the nature of Bach’s works changed dramatically as he went from composing powerful, reverberating pieces – such as Toccata in D minor – for performance within grand, open, undampened cathedrals, to composing works specifically for the many-galleried Lutheran church of Thomaskirche in Leipzig, which resulted in dramatically different compositions such as the B Minor Mass.

There are yet other composers who were just as precise in their marriage of composition and venue: Perotin composed hymns in the 12th century specifically for performance in Notre-Dame, whilst 17th century composer Giovanni Gabrieli designed pieces in which two separate choirs would stand in different parts of St. Marks, Venice to surround the audience with a sense of ‘magnificence, power and splendour’.

These composers have been recognising the way in which physics alter the nature of sound from as far back as the 12th century, and even today – in a world of wires and data transfer – the manipulation of the physical space is still a key tool in controlling musical performances. The Sydney Opera house has long battled with the fact that although it is perhaps the most iconic opera space in the world, the acoustics of the main Concert Hall are frequently called into question – with Matthew Drummond identifying a lack of power and consistency. As a result, a massive physical overhaul has been undertaken to lower the stage, tilt the walls and add acoustic reflectors – all to dramatically improve the quality and consistency of the sound experience.

Working in the field of digital audio technology though, my mind is never far from the technological solutions that may also be deployed to add flexibility and quality to the sound experience. The basics of physics still apply, but we have the ability to create high quality performance experiences in many more spaces than the originally carefully-designed concert halls.

I recently had the pleasure of working with an amazing audio team for a live theatre/musical performance. Everything about having provided the microphones and wireless for the Theater of War’s production of “Antigone in Ferguson” at the Harlem Stage was an intensely rewarding experience – from learning about this beautiful performance space, to meeting the people who work there, to working with the truly gifted expert sound designers and engineers, to the actual content of the show and the amazing performers. It was one of those “once in a lifetime” experiences.

The venue itself was the beautiful, but quirky, Harlem Stage in New York. Originally, the building was constructed as a pumping station to supply clean, healthy water to the residents of New York City via an aqueduct system from the Croton river north of New York city. Charming as it is though, this space was not designed for musical performances; the solid stone walls and domed arch of brick lead to what might be described generously as ‘interesting’ acoustic characteristics.

Adding to this is the size. The space is on the small-side, and thus perfect for intimate performances. How a space looks and feels, and how the audience interacts is extremely important in dictating the nature of a performance experience, and at the Harlem Stage audience members become connected to the action in a unique and special way. When I first heard the Antigone auditions I was almost knocked over by the sheer power of the vocals within such an intimate space.

Indeed, I must admit to being a bit shocked when I was first contacted by Matthias Gohl, Swiss musical producer, director, supervisor and composer – and sound designer for Antigone in Ferguson. He wanted to use Alteros technology to enhance the sound performance, but having heard such powerful voices in such a small space, my initial thought was “You want to put microphones on top of this!?”

After some initial experimentation though, the reasons for mic’ing the performers became clear. Of course, mic’ing performers is necessary in creating a recording, but it is also a really valuable tool in creating a sense of acoustic ‘balance’. Balance is key – an almost zen element that takes the individual characteristics and components of an audio system and makes them ‘disappear’. When you think about it it’s really quite an odd concept; you want to ‘see’ the lighting, the costumes, the set – but you don’t want the sound to be anything other than harmonious and natural.

So, how did we accomplish the ‘disappearing trick’? Counter intuitively, the answer lay in using more microphones, not fewer. The three-row, tightly packed choir composition of the singers would traditionally call for the use of over-heads or x-y configurations in front. We recognised though that with the intimate nature of the space, more creative solutions had the potential to render exceptional clarity and balance in the performance.

As a result, we pursued an individual mic solution. A very tight hyper cardioid capsule was used, and the individual microphones were placed on the performers in a strategic spot between the mouth and the ear of each singer. This placement was the brain-child of Frank Filipetti, the highly talented, 7x Grammy-winning music producer, engineer and mixer. I love working with Frank, and I could write a whole separate piece on his creative approach, but I will save that for another day.

Frank’s goal was to capture the performance by placing a microphone in the location where the performer hears their sound and thus adapts and optimizes their performance. The next goal was to capture this sound and deliver it consistently and accurately to every single location within the performance space; something that is vital for both performers and audience alike. From a technological standpoint though, it was an undertaking of some complexity – taking the smallest and most accurate signals and then amplifying them, time aligning them, controlling them and issuing them with precision. It was a process of creating and maintaining ‘resolution’.

Moreover, all this needed to be achieved without the phase interference, overload/distortion, and off-axis sound pick-up issues that are often associated with such an undertaking. The sounds needed to resemble what you’d expect from a studio environment; clean, clear, in phase, full-audio sound quality without compromise. That was accomplished with the specific microphones, their unique placement, and of course – the Alteros GTX wireless microphone transmitters. Operating without companders or conversion jitter, and with a full 500MHz wide digital audio signal and patented timing precision, the GTX series provided pristine audio quality. The room was then carefully ‘rung-out’ and a very clean signal was fed to the house PA and the performers’ stage wedges (Yes! They actually used wedges. And the nice thing was, the mic placement and pick-up pattern was completely immune to the signals from the wedges).

The end result was that perfect balance of sound. It was a perfect blend, powerfully delivered to every location in the theatre. It accomplished precisely the goal of ‘sound disappearance’ that we had been aiming for – allowing the performers to focus on their performance and express themselves to their absolute best. In fact, one veteran performer exclaimed “This is the first time I feel like myself singing through a wireless mic!” It allowed the audience to focus not on the negatives of harsh sound, distortion, phasing or uncomfortable balance; instead, the audience was able to hear and feel the performance in a meaningful way. The sound became only a delivery mechanism for creating the fundamentally powerful emotions of the performance.

Ultimately, this is what the audience really wants to experience at a show, and it is the reason why we do what we do. I can still hear it, feel it – that perfect balance, the ‘zen’, the art of disappearance – and I’m pretty sure the audience did too, even if they didn’t realize it!