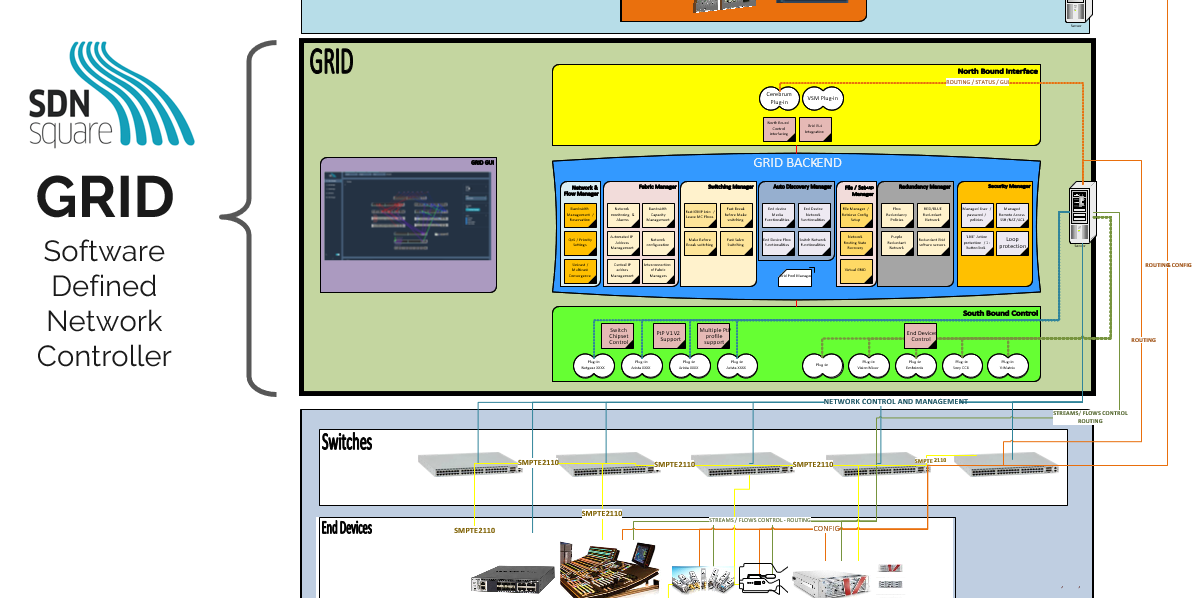 SDNsquare to Showcase Range of Network Optimisation Solutions at IBC

At IBC 2019, Belgian media IP-networking and storage company SDNsquare is co-exhibiting with Arista (stand 8.E30) and EMG (stand OE.D01) where the company will showcase its growing range of solutions for optimising the predictability, performance and management of high traffic IP networks – making them more cost-effective to operate.

Among these is SDNsquare’s patented GRID software-defined network controller.

“The challenge we’re addressing is how to orchestrate the network so that it meets the exacting needs of broadcasters dealing with a wide range of media workflows, and delivering guaranteed Quality of Service per stream on a single converged network with a scalable architecture,” said Henry Alexander, CEO of SDNsquare. “GRID delivers IP network management for media that is reliable, flexible and cost-effective and it simply works, whatever the use case, whatever the type of workflow.”

GRID can cope with all type of data streams in a predictable way. With GRID, users can set up IP data paths without packet loss, with low latency and with the exact bandwidth they need – even in bursty, high-impact traffic in many-to-many environments. GRID also provides the capability to optimally manage any type of topology, including today’s spine-leaf topology networks.

The numerous advantages of GRID include the fact that it is easy to deploy: it is truly plug and play, with autodiscovery, registration and connection management according to AMWA and device specifications. GRID can be scaled from single studios and events to large and interconnected facilities, events and data centres – both LAN and WAN. With GRID, there is no need for users to duplicate their network, as it enables fully redundant paths to be set up, with automatic failover if links go down.

Receiving its first major showing in Europe is L-GRID, having made its debut at NAB 2019.

“In today’s networks, high performance nodes are often equipped with high speed network cards – anything from 10 Gigabits to 100 Gigabits,” said Alexander. “This can reduce the cabling complexity of the nodes – but it creates an end-to-end speed mismatch with lower bandwidth clients. In turn, this leads to oversubscription in the connecting network. L-GRID was created to address that problem.”

L-GRID tackles the issue of speed mismatches between high speed and lower speed endpoints at the source, increasing the efficiency of storage and core networks and reducing the need for investment in the network.

The network card is configured by L-GRID to only allow bursts of the configured bandwidth; data flows to the preconfigured destinations are sent out of the network card perfectly shaped to the given bandwidth. As the L-GRID eliminates bursts before they enter the network, no exhaustive buffer space is required from the connected switches.

L-GRID is a software component that works with selected network cards, and runs on high speed network endpoints (clients/servers) that send data to lower speed endpoints.

Also on show on IBC stands 8.E30 and OE D01, is WARP, a linearly scalable, clustered storage and computing platform to support real-time workflows in the most demanding environments.

“With traditional solutions, users run into at least four key challenges,” continued Alexander. “Variable, unpredictable performance both for storage and for running client applications; over-provision of hardware to compensate for that unpredictability; the impossibility of predicting future demands and costs; and the inability to calculate the cost per service or user, such that more flexible business and service models cannot be established. WARP has been designed to tackle all of these.”

Further information on SDNsquare and its products is available at www.sdnsquare.com .