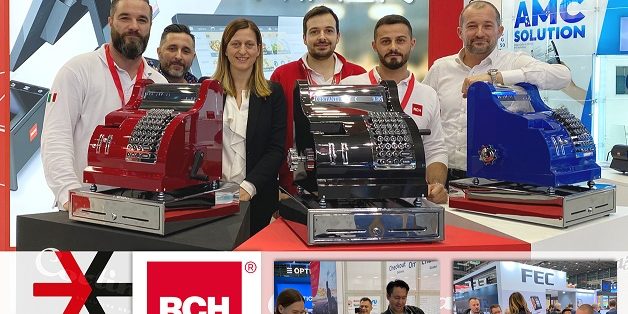 RCH Sums up its Experience of EuroShop 2020 in Düsseldorf

The show must go on!

Who could write a post-tradeshow article without mentioning the ‘C’ word…?

It’s a difficult year for tradeshows, and for travel in general. The Coronavirus was obviously the word on everybody’s tongue (though hopefully not the germ on everybody’s hand…), and it was clear that a number of people had chosen to stay away this year. The halls of EuroShop 2020 were noticeably quieter.

But for us at RCH, the ability to meet our distributors, partners and end-users in person is an absolutely vital element of what we do. Of course, that has to be within the context of reasonable safety precautions – but we came armed with gallons of hand sanitizer and ready to ‘fist bump’ rather than handshake –  so we felt confident that it was still statistically fairly safe to attend an exhibition like Euroshop 2020. And the experience we had there made our efforts more than worth it.

It seemed to us that the attitude of show attendants was somewhat different this year. In previous years, there has been a significant focus on innovation – both in terms of the products offered, and the rhetoric of those attending and investigating industry offerings. However, this year, end users were coming in with a much more straight-forward approach. They weren’t at EuroShop to see ‘what was out there’, they came with a very specific set of requirements, and they wanted to see who had concrete solutions to their needs.

This ‘solutions orientated approach’ suited us down to the ground. Providing solutions to the existing and upcoming issues facing users has always been more important to us than reinventing the wheel just to prove we can.

Certainly, innovation has always sat at the heart of what we do – but we generally favour an incremental rather than revolutionary approach. In this way, the user audience has a much stronger opportunity to adjust their mindset and practices to the innovation – adopting a smooth learning curve which does not disrupt their business. ‘Disruptive’ innovation might be all well and good in the consumer market, but businesses need products that meet their needs and improve their performance without having to relearn everything they know once a year.

That is not to say that we don’t believe in fundamentally changing business attitudes – we believe that creativity, innovation and a willingness to think differently are key drivers in any industry, and particularly ours. Indeed, many of the components of the  ATOS 15 have significantly changed the way that retail and food service outlets can manage their businesses; integrating accounting practices in a way that hadn’t been envisaged as possible by small businesses just ten years ago.

But the introduction of this ability cannot be sudden. Retail and food service are so fast-paced and constant – almost 24/7 undertakings – that there can be no time for fundamental retraining. Innovation should be both gradual and intuitive, evolving the user into a new way of operating over time, rather than in a sudden crash of chaos and novelty.

A gradual roll-out of innovation also ensures that both we and the end-user can check that these innovations are heading in the right direction and doing what they need to: namely, providing the solutions that businesses need to stay efficient, provide exceptional service, and remain profitable.

As such, two key themes emerged as we talked with distributors and end users. The first of these was non-technical and concerned the style. EPOS systems take up a dominant space within store and restaurant environments, yet their aesthetics are all-too-often considered as afterthoughts. Because they are pieces of technology, then a generic ‘futuristic’ technology look is applied to them without much thought. Grey and plastic are frequently the order of the day.

That’s why our Cortina 59 series received so much attention. Our CEO Stefano de Pra describes it as ‘a vintage, mechanical look with all electronic functionalities you can expect from a modern EPOS system’. It’s no accident that the name shares a history with the classic, retro, smooth styling of the Ford Cortina, though it can be argued that the name is as much a homage to the stunning Cortina region of Italy (which incidentally will be host to the 2026 Winter Olympic Games).

Regardless of arguments about its true namesake, the bold colours and striking design of the Cortina 59 make a statement – making the Cortina 59 incredibly suitable for retail venues and restaurants that use atmosphere and environment as a key part of their USP.

The second theme, the substance, is embodied by A-IRON that we developed for retail environments. Based on our ATOS 15 concept, the A-IRON has a sleek, industrial look full of graceful curves with an elegant metal finish. The A-IRON doesn’t just become a part of the store aesthetic, it becomes a deliberate feature of it.

The clear visual appeal of both solutions was evidenced by the foot traffic they brought to the booth – people who weren’t even seeking EPOS solutions would pause to look simply because they were both beautiful items, and entirely unlike other offerings on the market at the moment.

The other key theme to arise was – unsurprisingly – the fiscal changes that are being implemented within the German market. Fortunately, since we’ve already undergone similar changes in the Italian market, and have been present in the German market for a number of years, our products are more than ready for this.

There are yet still some changes that are potentially going to occur as the German government addresses the situation further – but fortunately our market expertise and our internal agility mean that we’re well placed to evolve our systems to achieve legislative compliance with all of our products.

And in fact, it’s not just the German government who will be announcing new developments this year – we at RCH have got a surprise or two up our sleeves as well…