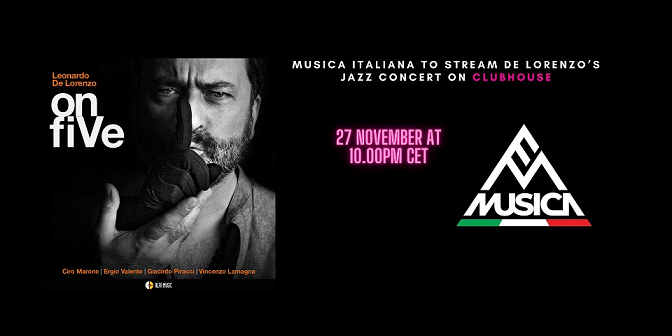 Musica Italiana, a Clubhouse club founded in February 2021 by Marco Salom­ (Director, Producer and Composer) and Francesco Altobelli (CEO of ondesonore records) announces the streaming event of De Lorenzo’s jazz concert on 27 November at 10.00pm CET. The online event will run simultaneously with the live concert that will take place at Teatro Summarte in Naples, Italy.

In order to create a seamless sound experience, Angelo Sciaudone music journalist and consultant will be onsite ensuring that the output of the audio console will be feeding a router to achieve a high-quality streaming when connected to Club House.

During the live concert, Leonardo de Lorenzo Quintet (Ciro Marone, Ergio Valente, Giacinto Piracci and Vincenzo Lamagna) will introduce ‘on fiVe’, their new Album that is already available on CD. The name inspired by the English saying “to be on fire‘‘ has evolved into a combined connotation of a ‘firey‘ mood and the five-based group identity.

De Lorenzo expands on the numeric symbolism: “Number five has played  a key role in this project. I started working on this musical repertoire when I was about to turn 55 and five pieces out of six are written in 5/4 time, five beats to the measure, instead of the more commonplace three or four.“

Excited by the coming online event Marco Salom comments: “Altobelli and I are thrilled to host this musical happening in support of musicians while exploring the boundaries of streaming technology. We all appreciate Clubhouse for its immersive audio, intuitive use and constant updating to improve and serve a large community.” He concluded: “We look forward to this collaborative event because it will introduce a new way of performing and consuming music.”

Clubhouse is a social audio app for iOS and Android where users can communicate in audio chat rooms that accommodate groups of thousands of people. Clubhouse has added 10 million users since mid-May. Musica Italiana Club with more than 5K members organizes rooms that are fully dedicated to music lovers and performers.

About Xpresso Communications
A multi-award-winning PR and digital marketing company that provides B2B integrated communications campaigns delivering brand awareness, international visibility and company growth to vendors in the media, broadcast, ProAV and other technology-centred markets. Headquartered in The Netherlands, the company has operations in New York and across Europe from Cologne, London, Bucharest and Paris to Milan. We are content specialists who make our customers’ digital marketing and customer experiences remarkable. We create a wide variety of content including press announcements, blog posts, articles, applied technology pieces, tutorials, case studies, awards entries and so on – all with the goal of supporting your sales and business development initiatives.
The Xpresso Communications team comprises senior communications strategists, digital marketing experts, senior writers with deep experience in technology content, content marketing, social media, brand building and business development.
More info at: www.xpressocommunications.com