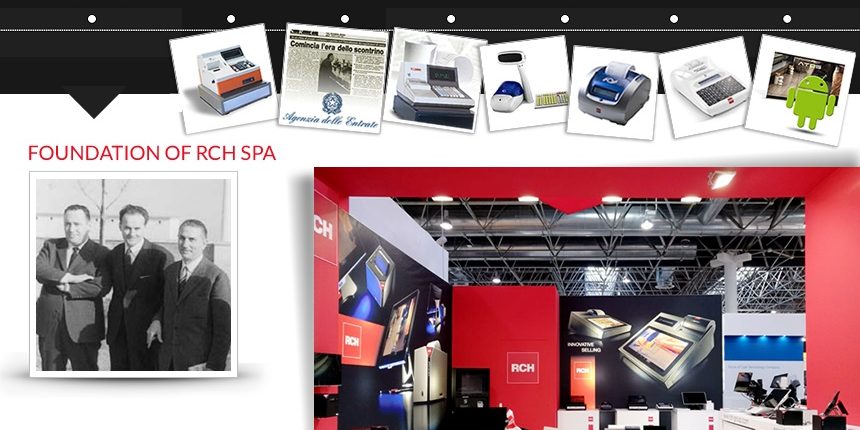 We’ve come a long way since the first cash register was invented by James Ritty in 1879.

Since its foundation in 1969, RCH Group has evolved into an organisation that we could never have imagined back in the sixties and seventies. Our history is marked by constant growth and transformation. Each period of change, while sometimes challenging, was powered by our desire to make the entire POS journey more efficient, manageable and user-friendly – both for the merchant and the consumer. That desire has been the driving force that has sparked some of the most innovative developments within the POS world, giving RCH Group its position today as a change-maker through technology.

Turn of the millennium – move from distributor to designer and manufacturer

To understand our journey, it’s essential that we return to the year where the biggest change began – that was at the turn of the century in the year 2000. Up to then, RCH had spent the previous 30 years distributing cash registers, essentially through OEM agreements. By 2002, the company had set up its own Research and Development centre and was designing products from the inside out – everything from the software to mechanical and hardware design was conceived by RCH engineers. In the aim of building our brand while keeping very close to our Italian origins, the company placed much effort on designing hardware that lived and breathed a perfect combination of elegance, modernity and simplicity – all characteristics of pure Italian designs.

From the beginning, RCH products were not just nice to look at, they were extremely smart within. A core value that has been at the heart of our Group through the years – a focus on smart, innovative features that add value to the business of the modern merchant.

2005 brought further change when a decision was made to bring hardware manufacturing in-house and so RCH Asia Limited was born.

Revolutionising the POS market through innovation

The very first product that we designed ourselves was in 2000, a special product called “NUCLEO”. It was introduced with the Electronic Journal feature and became the first modular cash register (not PC) with an embedded operative system for smart functions and advanced features, including sending emails or connecting to an FTP server to upload and download data. NUCLEO was a product with an innovative design and allowed RCH to reach a significant market share.

In 2006, a new type of Cash Register was invented: “PC GLOBE”. It was the first smart fiscal printer with a Microsoft Windows CE operative system, which featured an internal unit that is like a mini-PC. This solution not only allowed merchants to save space and money, it was also easy to use in comparison to what was on the market at that time. PC GLOBE underwent a restyling in 2010, and I-GLOBE entered the market with its renovated colours and elegance.

2007 was a great year for innovation in the consumer market with the arrival of the first iPhone. The touch features available on the iPhone inspired our engineers to build touch screen features into a cash register. And so, in 2009 “TOUCH ME”, an affordable touch panel cash register was born. The product came with a bright 7” colour TFT panel, a sensitive touch panel and a user-friendly graphical interface. Yet another innovative world first for RCH Group.

The move to Android and smart technologies

In 2010 Android was beginning to emerge in China. It was also the year that RCH Group had made the decision to invest more heavily in software engineering and application development. Seeing that Chinese people were rapidly moving to Android, an open-source solution, we made the decision that Android was the best solution for the next generation of RCH products. We knew that if millions of people in China were adopting Android, sooner or later, the rest of the world would follow. We were right! We built our first short application on Android –an app that allowed waiting staff to take orders by the table in a restaurant. From there, we developed other shorter apps and again we designed, not only the software but also the hardware based on Android. Since that first app was launched in 2010, RCH Group has successfully marketed several Android-based solutions, including the ATOS software and Abox.

Each solution is based on open-source technology and can be easily integrated with third party solutions.

Looking to the future – software reigns

Today, RCH Group employs more than 25 full-time engineers, of which 70% are software developers. That fact alone, gives you an idea of how software has become the primary focus at our company. As we had predicated back in 2010, the POS market is moving towards software design and applications more son than in the hardware itself. Today, hardware is still vitally important, but hardware is only a means of transporting the software which is at the heart of all great innovations.

Throughout the years, we’ve always stayed very close to the market and the end-users. Our network of authorised resellers are continuously providing us with feedback on what’s working, what’s not, and where merchants and consumers are still facing challenges. We also go into the field ourselves to see first hand how our products are helping merchants and to get their direct feedback.

Looking into the future, we will continue developing smart Android based software and hardware solutions that will allow merchants, from the small local store to the bigger retail outlets, to fully optimise and monetise their POS.

For further information on our history, please visit: http://www.rch-europe.com/who-we-are/history.html