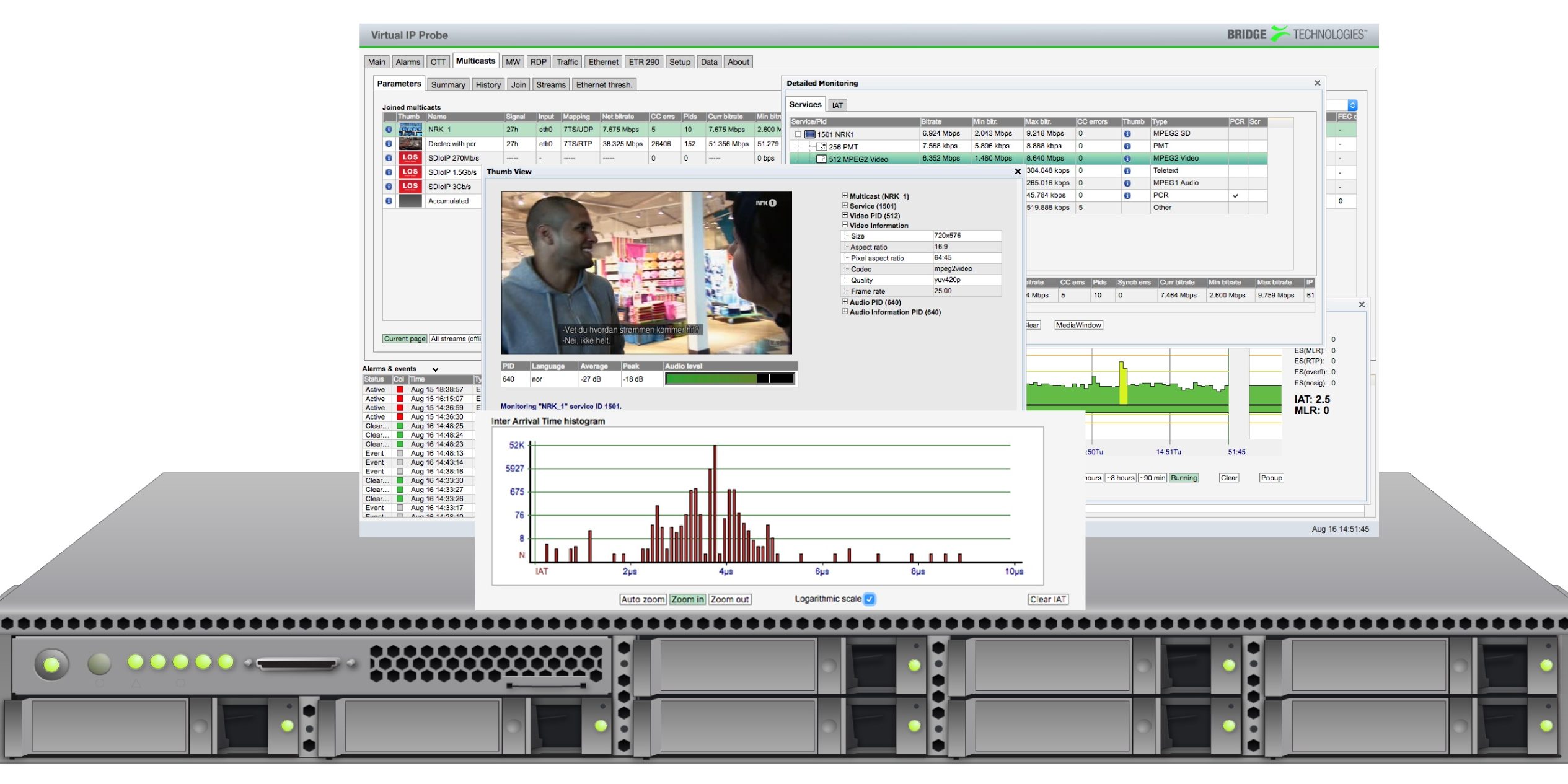 What are the main challenges in maintaining QoE as networks transition video distribution from DVB to IP? Do hybrid networks demand hybrid monitoring solutions?

SKF: The important thing to understand here is that one of the goals of the DVB initiative was that its approach to encapsulation is designed to be independent of the underlying carrier mechanism. DVB defined a data link layer protocol called Generic Stream Encapsulation (GSE) which was designed to carry packet oriented protocols such as IP on top of uni-directional physical layers such as DVB-S2, DVB-T2 and DVB-C2.

Thus, from a QoE point of view, there are relatively few challenges when it comes to monitoring the quality of the user experience. Whether the transport mechanism is DVB or IP, content monitoring is largely unchanged. That said, there are some specific aspects of how IP works that network engineers need to understand if they are to maximize network performance and QoE, but probes like the Bridge Technologies VB series provide even network engineers inexperienced with IP with an intuitive understanding of what’s going on.

As service provision moves to the Cloud, must T&M also?

SKF: Yes, it could move to the cloud – but it certainly doesn’t have to. The important thing is to look at what’s going on at the edges of the network, outside the cloud, however – in the physical world. If you’re broadcasting from a sports arena, for example, you’ll want to ensure that what you’re sending is of good quality. Monitoring at the beginning of the process makes sense.

Then, what about the user’s quality of experience? You can monitor in the cloud, for sure – but does that help you understand, and optimise, the quality of what a consumer is seeing?

In other words: there is much to be said for monitoring at as many points in the network as is practicable and affordable. Monitoring in the cloud makes sense – but not to the exclusion of monitoring the network from end to end.

Can broadcast T&M move into IoT and monitor the reliability, QoE and security of myriad devices across a wide plane of connections?

SKF: From our perspective, this doesn’t make much sense. In broadcast, the purpose of using Bridge Technologies probes to monitor traffic on the network is exclusively to maximize the user’s or consumer’s quality of experience, as evinced by optimum image and audio quality.

When you consider a typical IoT device – a thermostat, a video doorbell or even a smart refrigerator – the need for a stable, high performance network connection is much less. The user’s QoE is all about reliability and security. It would be wrong, I think, to conflate the specific requirements of media networks on the one hand with more generalised IoT networks on the other.

With bandwidths under increasing pressure and no prospect of streaming standards, how will 4K pressurise the system further and how can T&M de-risk the challenge?

SKF: The fundamental premise of the question – that bandwidths are under increasing pressure – bears some scrutiny. Yes, it is unquestionably the case that the advent of higher resolutions, such as 4K, and image optimisation technologies such as HDR and WCG (wide colour gamut) are generating a proliferation of bits that need to be moved from A to B.

Had we had those technologies three or four years ago – yes, it would have been a significant challenge, given the network infrastructure that was available back then. However: we’re now seeing, for example, 25 Gigabit switches at what are close to commodity prices; 40 Gigabit switches are becoming more affordable on a month-by-month basis; and we would expect 100 Gigabit switches in widespread deployment within the next 12 months.

From a T&M point of view, our 40 Gigabit VB-440 probe already provides support for 40 Gigabit networks – and we’ve demonstrated a prototype of a probe capable of supporting 100 Gigabit speeds.

As an example of the pace of change in the industry: at the beginning of November, Mellanox announced a new family of switches, with the top of the range Quantum CS8500 capable of supporting up to 800 ports at 200 Gigabits/second – or 1,600 ports at 100 Gigabits/second.

In summary: we really don’t see bandwidth as being under increasing pressure: the infrastructure available today is more than enough to support 4K resolutions and beyond.

Must all standards and DRMs be supported equally?

SKF: From our perspective, neither standards nor DRMs really impact what we do – the way in which our probes monitor a network and help engineers understand what’s going on really isn’t affected. In general, though, the answer is a qualified “yes” – the qualification being that, inevitably, commercial reality plays an important role, and those standards and DRMs that have the most widespread acceptance will be those that are top of the priority list when it comes to support.