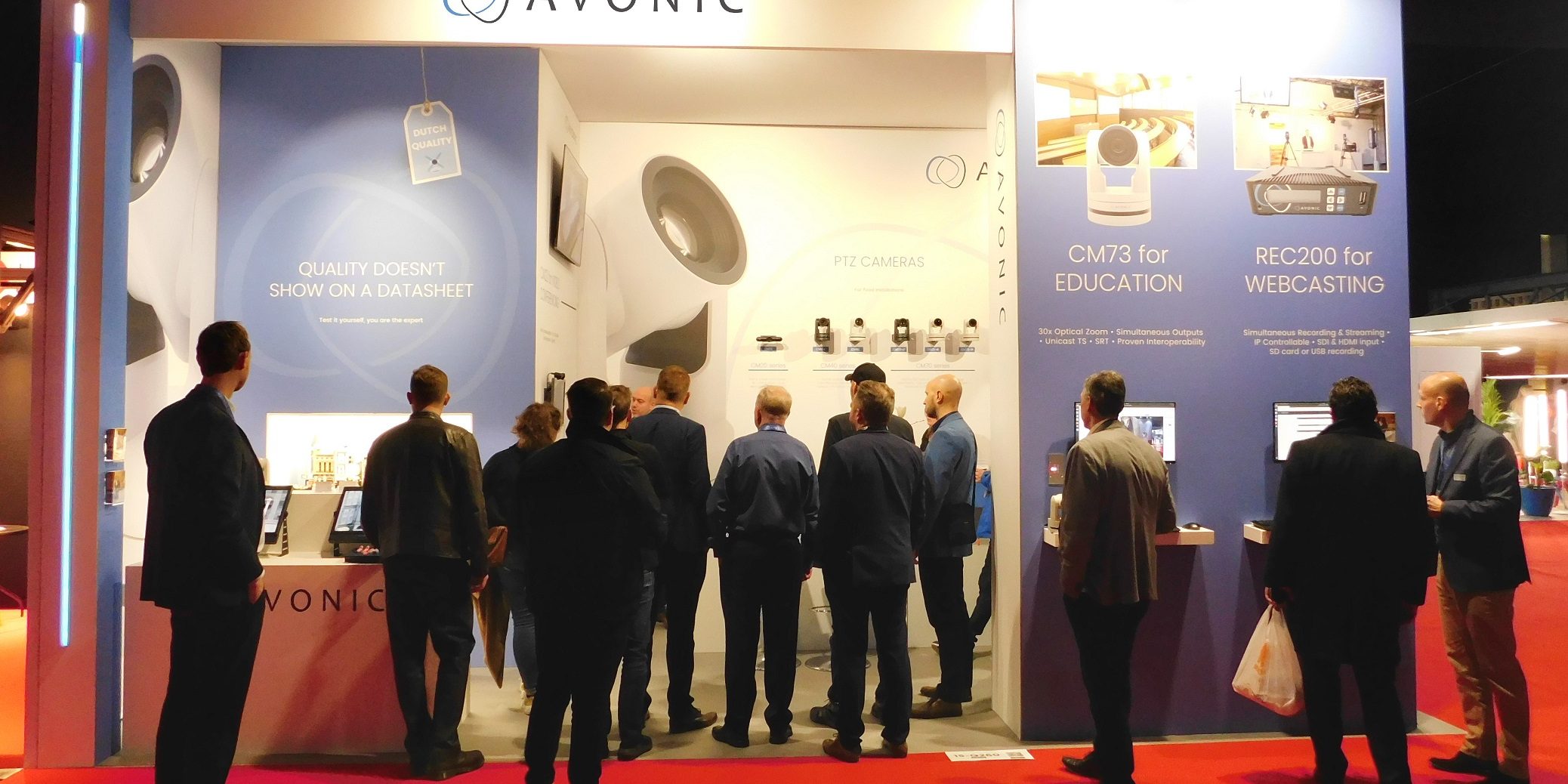 I spy with my little eye… Avonic PTZ cameras all around the RAI.

In this month’s blog, we recap the highlights of the recent ISE 2020. And there were more than just a few…

Inside big convention venues, it can become easy to forget where you are: The London ExCel, the originally named ‘Las Vegas Convention Centre’ or, of course, the Amsterdam RAI – it is all too easy to forget the iconic cities that sit outside the air-conditioned halls.

That’s why we’re always pleased to attend shows like ISE, because as a proud Dutch company with an international reach, we bring a touch of local flair to the proceedings. With our Delft-blue booth and an endless supply of Stroopwaffles, we bring a little bit of the outside inside.

This could also be seen in our ‘Lego street’ demonstration model. In order to demonstrate the crystal clear quality of images captured by our range of PTZ cameras, we needed something vibrant and interesting to point them at. As we’ve blogged about more than a few times, we all have a ridiculous love of Lego in the office, so what better to film than an Lego-brick street full of tall, higgledy-piggledy houses with bright frontages? An iconic Dutch image.

Another advantage of being a Dutch company is that we didn’t have far to travel. But interestingly, many of our Dutch counterparts in the industry weren’t making the journey – and we are sure you can guess why. Yes, there was just one word on everybody’s lips: coronavirus.

We certainly felt the effects of the virus (not literally…) in terms of how much quieter the halls were. But on our stand, it was almost embarrassing how much attention we were receiving. And moreover, we found that the ‘quality’ of the visits was much higher – people visiting us were not vague prospective clients, but instead tended to come with concrete application contexts and were actively seeking the right solution. Unsurprisingly, with the mix of quality, versatility, interoperability and value embodied within Avonic PTZ cameras, visitors usually left the booth very satisfied with what they had discovered.

Indeed, this buzz didn’t just come from visitors to our booth, but to other companies which were displaying our products – most notably, Bosch, Arbor Media and HRT/Biamp. In fact, we had quite a fun time playing ‘count the Avonic cameras’ around the RAI.

The media coverage we received also supported this. We were incredibly pleased to receive coverage in the ISE Daily on the first day of the show, outlining the benefits of our CM22 and CM70 range, and then have a chance to expand on this on the third day with an in-person interview. There, we were able to expound one of the key principles that underpin our products: interoperability and ease of integration.

We also had to make sure we had our prettiest faces on, as camera crews made a regular appearance around the booth. This included an interview with RaVE , and productions made by some of our distributors from Russia, Italy and Spain. It’s a good job we’re not camera shy (nor shy to talk about our cameras!).

And so, with a hectic four days down in Amsterdam, it is back to our brand new office and distribution centre in Delft. Bigger and better than ever (with more space and thus less potential to annoy each other!) we now have a multitude of post-ISE leads to follow up on.