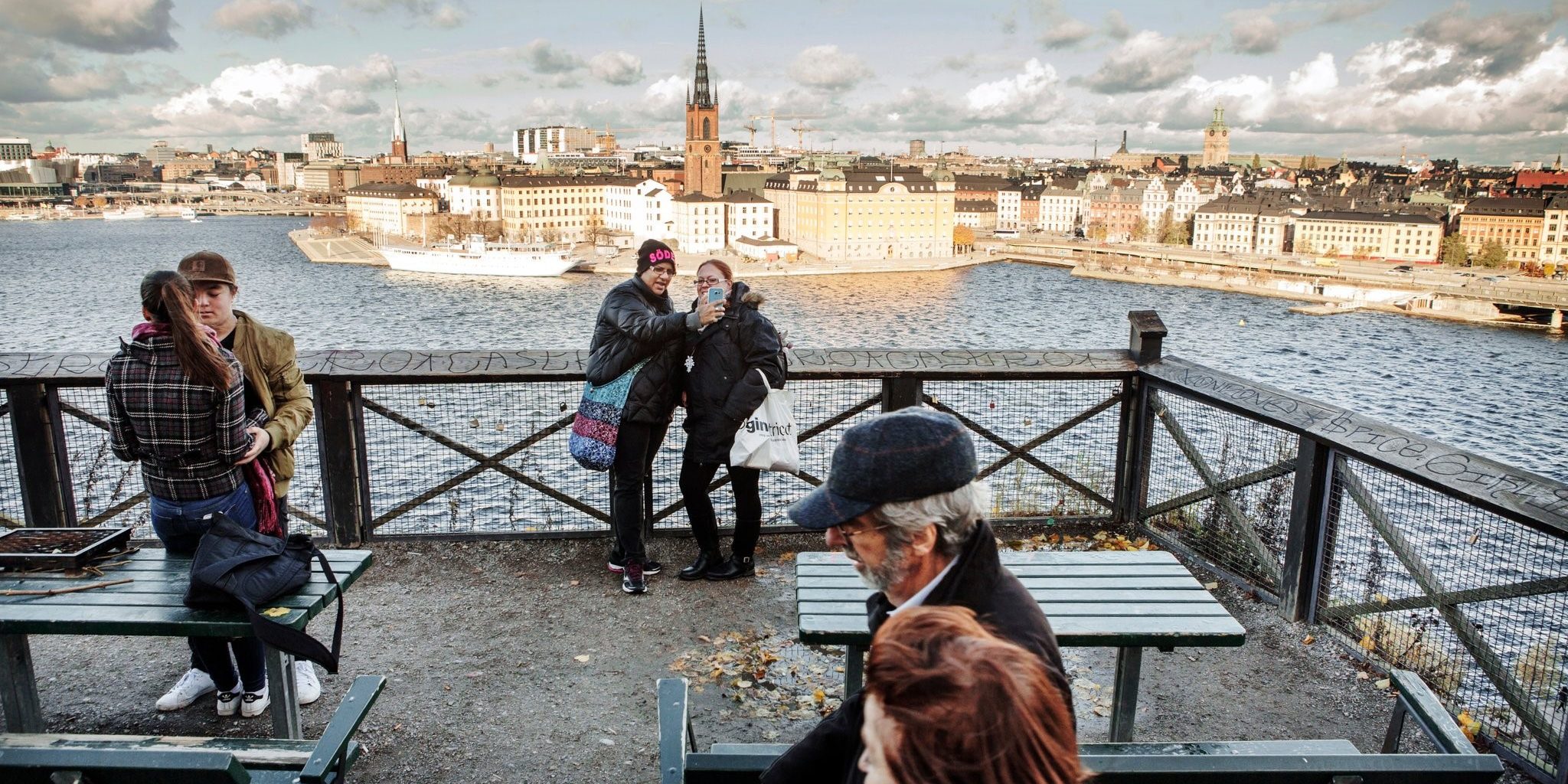 GARPENBERG, Sweden — From inside the control room carved into the rock more than half a mile underground, Mika Persson can see the robots on the march, supposedly coming for his job here at the New Boliden mine.

He’s fine with it.

Sweden’s famously generous social welfare system makes this a place not prone to fretting about automation — or much else, for that matter.

Mr. Persson, 35, sits in front of four computer screens, one displaying the loader he steers as it lifts freshly blasted rock containing silver, zinc and lead. If he were down in the mine shaft operating the loader manually, he would be inhaling dust and exhaust fumes. Instead, he reclines in an office chair while using a joystick to control the machine.

He is cognizant that robots are evolving by the day. Boliden is testing self-driving vehicles to replace truck drivers. But Mr. Persson assumes people will always be needed to keep the machines running. He has faith in the Swedish economic model and its protections against the torment of joblessness.

“I’m not really worried,” he says. “There are so many jobs in this mine that even if this job disappears, they will have another one. The company will take care of us.”

In much of the world, people whose livelihoods depend on paychecks are increasingly anxious about a potential wave of unemployment threatened by automation. As the frightening tale goes, globalization forced people in wealthier lands like North America and Europe to compete directly with cheaper laborers in Asia and Latin America, sowing joblessness. Now, the robots are coming to finish off the humans.

But such talk has little currency in Sweden or its Scandinavian neighbors, where unions are powerful, government support is abundant, and trust between employers and employees runs deep. Here, robots are just another way to make companies more efficient. As employers prosper, workers have consistently gained a proportionate slice of the spoils — a stark contrast to the United States and Britain, where wages have stagnated even while corporate profits have soared.

“In Sweden, if you ask a union leader, ‘Are you afraid of new technology?’ they will answer, ‘No, I’m afraid of old technology,’” says the Swedish minister for employment and integration, Ylva Johansson. “The jobs disappear, and then we train people for new jobs. We won’t protect jobs. But we will protect workers.”

A Cushion for Innovation

Americans tend to dismiss Nordic countries as a realm of nanny-state-worshiping socialists in contrast to the swashbuckling capitalists who rule in places like Silicon Valley. But Sweden presents the possibility that, in an age of automation, innovation may be best advanced by maintaining ample cushions against failure.

“A good safety net is good for entrepreneurship,” says Carl Melin, policy director at Futurion, a research institution in Stockholm. “If a project doesn’t succeed, you don’t have to go broke.”

Eighty percent of Swedes express positive views about robots and artificial intelligence, according to a survey this year by the European Commission. By contrast, a survey by the Pew Research Center found that 72 percent of Americans were “worried” about a future in which robots and computers substitute for humans.

In the United States, where most people depend on employers for health insurance, losing a job can trigger a descent to catastrophic depths. It makes workers reluctant to leave jobs to forge potentially more lucrative careers. It makes unions inclined to protect jobs above all else.

Making the United States more like Scandinavia would entail costs that collide with the tax-cutting fervor that has dominated American politics in recent decades.

Sweden, Denmark and Finland all spend more than 27 percent of their annual economic output on government services to help jobless people and other vulnerable groups, according to data from the Organization for Economic Cooperation and Development. The United States devotes less than 20 percent of its economy to such programs.

This is especially crucial in mining, a major industry in Sweden. Wages are high, with pay and working conditions set through national contracts negotiated by unions and employers’ associations. Boliden’s mines have some of the world’s lowest-grade ore, meaning it contains minute quantities of valuable minerals. The prices are set by global markets.

“We have every reason not to be competitive,” says Boliden’s chief executive, Lennart Evrell.

The only way for the company to ensure profit is to continually increase efficiency. This is why Mr. Persson and his co-workers in the control room will soon be operating as many as four loaders at once via joysticks.

The company is pressing ahead with plans to deploy self-driving trucks, testing a system with AB Volvo, the Swedish automotive giant, at a mine in the town of Kristineberg. There, Boliden has expanded annual production to close to 600,000 tons from about 350,000 tons three decades ago — while the work force has remained about 200.

“If we don’t move forward with the technology and making money, well, then we are out of business,” says Magnus Westerlund, 35, vice chairman of a local union chapter representing laborers at two Boliden mines. “You don’t need a degree in math to do the calculation.”

At the mine below the frigid pine forests in Garpenberg, 110 miles northwest of Stockholm, Mr. Persson and his co-workers earn about 500,000 krona per year (nearly $60,000). They get five weeks of vacation. Under Swedish law, when a child arrives, the parents have 480 days of family leave to apportion between them. No robot is going to change any of that, Mr. Persson says.

“It’s a Swedish kind of thinking,” says Erik Lundstrom, a 41-year-old father of two who works alongside Mr. Persson. “If you do something for the company, the company gives something back.”

That proposition now confronts a formidable test. No one knows how many jobs are threatened by robots and other forms of automation, but projections suggest a potential shock.

A 2016 study by the World Economic Forum surveyed 15 major economies that collectively hold two-thirds of the global work force — about 1.86 billion workers — concluding that the rise of robots and artificial intelligence will destroy a net 5.1 million jobs by 2020.

A pair of Oxford University researchers concluded that nearly half of all American jobs could be replaced by robots and other forms of automation over the next two decades.

When automated teller machines first landed at bank branches in the late 1960s, some foresaw the extinction of humans working in banks. But employment swelled as banks invested the savings into new areas like mortgage lending and insurance. Similar trends may play out again.

Three years ago, Soren Karlsson quit his job on the business side of a Swedish newspaper to start United Robots, a venture that one might initially think was aimed at ruining the lives of his former colleagues: He developed a robot, named Rosalinda, that scans data about sporting events to yield news stories.

“The stories are not as colorful as a human would write,” he says.

But his robots never break for lunch. Today, Mr. Karlsson has six people working at his offices in the city of Malmo. He expects that Rosalinda will write 100,000 stories this year for various Swedish media outlets, bringing his company revenue of about 5 million krona (about $590,000).

At the Swedish Union of Journalists, no one seems concerned. Rosalinda is mostly adding coverage that did not exist before — stories about high school floor hockey games, middling soccer matches.

“We have always tried to applaud and embrace new developments,” says the union president, Jonas Nordling. “We can’t just moan about what is happening.”

Yet even if robots create more jobs than they eliminate, large numbers of people are going to need to pursue new careers.

One such council in Stockholm, the TRR Trygghetsradet, boasts that 83 percent of participants have found new jobs this year. Two-thirds have landed in positions paying the same as or better than their previous jobs.

But some worry that the system could be overwhelmed by the impact of automation. The number of students older than 35 has fallen by nearly one-fifth in recent years at Swedish universities, which have curtailed enrollment of midcareer laborers while focusing on traditional degree programs.

“That’s a kind of warning signal for us,” says Martin Linder, president of Unionen, which represents some 640,000 white-collar workers.

Maintaining Sweden’s social safety net also requires that the public continue to pay tax rates approaching 60 percent. Yet as Sweden absorbs large numbers of immigrants from conflict-torn nations, that support may wane. Many lack education and may be difficult to employ. If large numbers wind up depending on government largess, a backlash could result.

“There’s a risk that the social contract could crack,” said Marten Blix, an economist at the Research Institute of Industrial Economics in Stockholm.

For now, the social compact endures, and at the Boliden mine, a sense of calm prevails.

The Garpenberg mine has been in operation more or less since 1257. More than a decade ago, Boliden teamed up with Ericsson, the Swedish telecommunications company, to put in wireless internet. That has allowed miners to talk to one another to fix problems as they emerge. Miners now carry tablet computers that allow them to keep tabs on production all along the 60 miles of roads running through the mine.

“For us, automation is something good,” says Fredrik Hases, 41, who heads the local union chapter representing technicians. “No one feels like they are taking jobs away. It’s about doing more with the people we’ve got.”

Why Marketing Communications Can’t Ignore the Personality of Your Business?
January 13, 2021

How to keep the Monkey Brain at bay in business
November 23, 2020