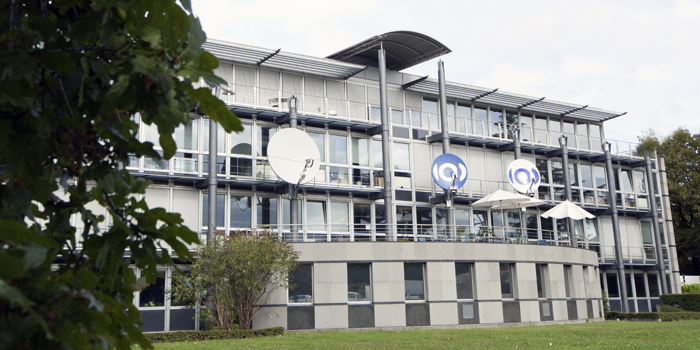 Peter MacAvock, a long-standing figure in the European broadcasting arena, wears many hats: he has been involved with the European Broadcasting Union for several decades, holding the position as Head of Delivery Platforms and Services, EBU Technology & Innovation (EBU Tech) since 2008. He is also Chairman of the Steering Board at the DVB and Co-Chairman of the Requirements Group and elected to the Steering Group at HbbTV.

Tell us a bit more about your career

Although I have worked in the EBU Technical Department (now called “Technology & Innovation”) since 1994, I have had the pleasure of spending many years in the DVB Project which started when I joined.

I was originally hired almost straight out of university to project manage a new association designed to digitise analogue TV – the Digital Video Broadcast (DVB). I was very green but quickly learned to manage some of the politics. We had great fun developing and demonstrating new technologies and building the DVB brand.

Now things are a little harder – at EBU Tech I work closely with the public service broadcasters providing them with information, expertise and technical support. Because we spend public money, it is paramount that we are acutely aware of generating value for both our Members and the consuming public, and that we can account for every euro spent. As such, measurement becomes a larger part of our portfolio than might have been the case in the past. But it’s still fun! I’m back involved in DVB’s management (since 2016), and I also set up the legal structure for HbbTV – a technology found in all connected TV sets in Europe (and beyond).

When did you start working and where?

When I graduated from UCD with an Electronic Engineer Degree, I went on to get a French Engineering Diploma in Grenoble. Not being able to find work in France, I returned to Ireland where I started a Ph.D. in Integrated Circuits in the Dublin Institute of Technology (DIT) and had some teaching hours in DIT and Trinity College, Dublin. But I wasn’t a fan of the politics, so when offered the opportunity to apply for a job in Geneva, I took it. I started out my life in Geneva as a part-time teacher before taking up full-time employment at the EBU Geneva, working 100% for the DVB Project.

In what field did you study?

What knowledge gaps did you experience back then?

The practical application of the technology you studied was always a problem. I might have been an electronic engineer, but I had little idea how the theory was put into the systems which were used in everyday life.

How did you fill your gaps?

When it came to working in the EBU, it was all about building a knowledge base in a short time in order to function professionally quickly. Therefore, I applied the techniques for learning, rather than building the theory up from scratch. It was also a new field for me but the way I learnt then, and learn today, is by speaking to people and listening, rather than reading – that hasn’t changed. I guess I was always a communicator more than an inventor, although I must admit that at times I did play a little role in the invention process all the same!

Talk about your first technical challenge

I don’t know if it was my first, but I remember trying to do MPEG-2 video-interoperability demonstrations. This involved taking an encoder from a single vendor and then having multiple set-top-boxes decode the signal. The challenge was first to connect all the equipment together to make it work on any decoder, and then analyse why it wouldn’t work on all the decoders. I became quite good at connecting the bits and identifying the problems through looking at picture break-ups and then bashing the heads together to resolve them. The first demonstrations were at NAB 1996 and we hosted Rupert Murdoch and Ray Dolby on the stand.

Any other tech anecdote?

There are many of these! The first HDTV transmissions over a terrestrial network took place in 1997 in Switzerland at the Television Symposium in Montreux. The demonstration was using an outside broadcast van from the Italian public broadcaster- RAI, MPEG-2 HDTV encoding equipment from ADTT/Thomson, a DVB-T modulator from NDS, and a transmitter provided by Harris (UK). Getting the equipment together was fun: the RAI couldn’t lend me a standalone Panasonic D5 machine, but they could lend me the staff and the HD outside broadcast in which the Panasonic D5 machine was installed. So, we had live HD DTT broadcasts, and there just happened to be an Irish choir (with instruments) touring Switzerland at the time who needed to practice, so we filmed them and broadcast it live! And all this was run from a girl’s finishing school overlooking Montreux.

I’ve come to realise that the great technical people in our business tend to be generally great in other areas as well – which was a paradox for me. I don’t count myself amongst them, but what struck me was that they all had hobbies in which they excelled. Many had a passion for music, one was a champion racing car driver, others exceptional athletes. Where they found the time and energy to devote themselves to so many passions is beyond me!

As I have grown older, I have developed an interest in high-quality music reproduction. Not spending lots of money on it but getting it to sound as good as possible.

Share your vision about any tech enhancement, future revolution

I am a strong believer in public service media. There are logical and understandable forces which seek to harmonise and unify Europe. These have resulted in economic, political and defense unions. However, we see recently that this harmony is being threatened by more right-wing populist movements in some European countries. In these difficult times, what makes Europe special is our cultural diversity, and public service media are the embodiment of that. More than ever, we’re under threat from the US-based Internet blue chips (GAFAM, Netflix, etc.), but that makes defending PSM all the more important.

It’s only through breaking down all the technology barriers between the different broadcasters can we hope to address the threat to the industry, and EBU has to be at the heart of this as it once was.

Be fair. This might force you to be unkind at times but never compromise on being fair.

The European Broadcasting Union (EBU) is the world’s leading alliance of public service media (PSM). We have 73 Members in 56 countries in Europe, and an additional 33 Associates in Asia, Africa, Australasia and the Americas. Our Members operate almost 2,000 television, radio and online channels and services, and offer a wealth of content across other platforms. Together they reach an audience of more than one billion people around the world, broadcasting in more than 120 languages. The EBU operates Eurovision and Euroradio services.

DVB (Digital Video Broadcasting) is an industry-led consortium of the world’s leading digital TV and technology companies, such as manufacturers, software developers, network operators, broadcasters and regulators, committed to designing open technical standards for the delivery of digital TV and other broadcast services.

Hybrid broadcast broadband TV (or “HbbTV”) is a global initiative aimed at harmonizing the broadcast and broadband delivery of entertainment services to consumers through connected TVs, set‐top boxes and multiscreen devices. The HbbTV specification is developed by industry leaders to improve the video user experience for consumers by enabling innovative, interactive services over broadcast and broadband networks. The specification uses elements of existing specifications from other standards including OIPF, CEA, DVB, MPEG-DASH and W3C.