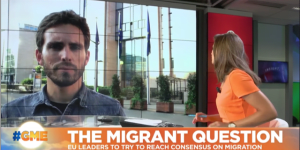 In Part I, the author discussed the current state of ENG and the move to mobile journalism. In Part II, he looks at Euronews’ adoption of smartphone newsgathering.

For journalism’s sake, Euronews’ pulling the ENG/SNG plug in favor of smartphone newsgathering needs to succeed and set an example for news outlets around the world. NBC is acquiring valuable technical and workflow experience that could smooth the path for other video news providers to vastly cut video production costs while providing more, faster and better reporting—live and on-demand—direct from news venues.

But where could Euronews’s technical innovation go wrong?

At the same time that Deborah Turness, the new president of NBC News International at NBC News, pulled the plug on legacy cameras and live trucks she also changed the way Euronews is presented on air and online. She introduced a studio-based, linear news show format with live anchors. Similar to what NBC’s TODAY and Nightly News have been doing for decades. As she explained at IBC:

“Previously Euronews was a post-produced platform delivering a video playlist of edited packages with no live studios, no live anchors, and without a network of journalists on the ground. That’s been all changed. We’re effectively launching a startup within a legacy news operation.”

So now Euronews’s live anchors interact with iPhone journalists who report live from the field. Turness calls it “real time journalism.” Euronews promos say its reporters are “fast and untethered.”

But has Euronews taken one step forward and another back? While its reporters are now disconnected from live trucks, they have become tethered to Turness’s newly introduced, scheduled news shows.

News shows require viewers to watch and wait for stories they’re interested in. It’s a dying format that instead of liberating mobile journalists with their smartphones, forces them to go live at certain times, often, perhaps usually, after the news event has died down or is over.

To justify the high cost of ENG crews and live trucks, journalists often report live from scenes of stories that occurred hours before and no longer unfold. Reporters are seen standing in front of empty buildings or at inactive news scenes, often at night. Thus, the expression black hole live shot. Google it.

Media critic John McManus’s opinion is shared by hundreds if not thousands of journalism educators, critics and reporters:

“It’s a gimmick that tricks viewers into thinking a story is worthy of special attention; why else would the station go live? The capability to broadcast live diverts dollars—that might have been spent hiring more journalists–into the purchase of hugely expensive live vans. Stations are buying live background—wallpaper—at the expense of substantive reporting. Because those trucks must be used to justify their cost, newscasts become shallower—more oriented toward visual, location-specific events and less about issues.”

Is Video or Text Going to Work Better for Your Communications?
April 8, 2020

What do the blues have to teach businesses and workers during this tough time?
April 2, 2020

Communications Activities are the Fingers you Need to Keep Things Working
March 11, 2020